Crucial decisions must be taken at five points during a project; these decision points correspond to the end of each project phase, and they call for recording the projects current status and writing an intermediate report. They also provide the opportunity to reconsider the project phases that are yet to come.

At these decision points, project leaders should consult with their clients regarding decisions about the project and adjust the control factors, if necessary. For example, if many new and unexpected requirements have emerged during the definition phase that could increase the costs considerably, it is useless to proceed with the original budget.

The decision points at the end of the phases are often go/no-go moments; they call for decisions regarding whether to proceed with the project or whether it should be discontinued. 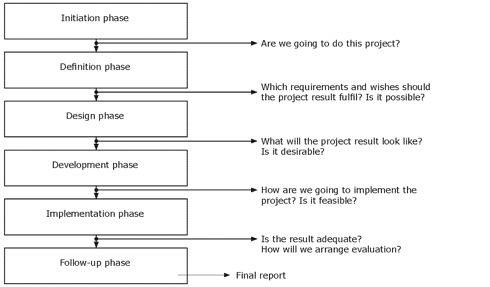 The following situation often occurs in organisations that do not work according to project phases: a project plan is initially written, in which the control factors are described. A timeline (Time) is specified, and a budget (Money) is prepared, a team is formed (Organisation), a goal is described (Quality) and the tools for information services surrounding the project are determined (Information). During a project, the project leader continues to make sure that the project remains somewhat within the total budget and the timeline, but makes no real adjustments. Near the end of a project, the project proves to cost more or to take longer than originally expected. The project is then scaled back to avoid further cost over-runs or delays. Unfortunately, the project result suffers.

Projects involve uncertainty. At the beginning of a project, the exact amount of time that will be needed is not known, nor is the precise amount that the project will eventually cost. For some projects, it is even uncertain whether the intended goal will be reached at all. In a world of fast-paced change, the foundations of a project have sometimes already changed before the project is completed. This sometimes occurs because of technological developments or developments in the market or political arena.

When preparing project plans, project leaders can only estimate the control factors (i.e. time, money, team, quality goals and necessary information) of the project. As the project proceeds, more knowledge emerges about the project itself. In the initiation phase, only an idea exists. In the definition phase, the idea is refined according to requirements. In the design phase, possible designs are examined and developed, providing even more clarity. In the development phase, it becomes clear how the design should be realised. In the implementation phase, the actual project result is built, and in the follow-up phase, all of the loose ends are tied together.

Clarity increases as a project progresses. It is therefore pointless to make a detailed budget for the follow-up phase (which will take place later) during the initiation phase. At this stage, it is still possible for the project to proceed in any of a number of possible directions. The idea has yet to be elaborated. The exact form of the follow-up phase is probably also known only in the broadest terms. This is too little information upon which to base a realistic, detailed estimate for the follow-up phase. A broad outline of a budget is the most that can be expected at this stage.

Project plans therefore work as follows: a global budget is made for the entire project, along with a concrete budget for the next subsequent phase. For example, if a project team is preparing to enter the implementation phase (after the development phase), they are well aware of what must happen. At that point, it is possible to make a detailed budget for the implementation phase.

Making a global budget for the entire project and a concrete budget for the next phase is important, and not only for the control factor of money. It is important to work from global to concrete for the other factors as well.
The process of making budget estimates can be summarised as follows:

Budgeting should occur before each phase.
Make or adjust the global budget for the entire project.
Make a concrete budget for the next phase.
All control factors should be reconsidered and re-estimated for each new phase.
Budgeting in this way (particularly with regard to time and money) is a realistic manner of coping with uncertainty, which is greater at the beginning of the project than it is at the end. It creates a problem, however, for organisations that are financed by government subsidies, social foundations or both. This is particularly true for organisations that conduct innovative, and thus uncertain, projects.

Most foundations and grant makers require a project proposal that includes a complete and firmly established budget before they will release funds for a project. An organisation that seeks financing for a project must therefore develop a complete, concrete budget at a very early stage. In the beginning, however, the project is still in the conceptual phase, and it is thus impossible to make a realistic cost estimate or timeline. Only after the design phase, when the idea has been elaborated and a design has been chosen, is there sufficient information to say how much the project will cost and how much time its implementation will take. This stage does not occur until several months after the grant application must be submitted.

One result of the way in which grant makers and foundations tend to work is that many organisations request amounts that are based on rough estimates of the project costs. Project activities are subsequently fitted to the budget that has been made available. This puts the project team in a tight position from the start, even though the most flexibility is needed in the early stages.

The process of elaborating concepts during the definition and design phases, therefore, often reveals that the timeline that was proposed in the grant application is not feasible. The budget may also prove inadequate, including too much for some items and not enough for others. Any additional requirements from the grant maker (e.g. no item may deviate more than five per cent) place the project team under immense pressure. Matters must be implemented in too little time and within a budget that is too tight. This situation often leads to considerable shuffling among the various items in the budget. Considerable text and analysis is then necessary in the project statement to explain why the desired result was not achieved.

The situation would improve if grant makers were to couple their financing onto the various phases instead of providing funds at one time in advance. The initial financing would then be intended for the definition and the design phases. The requirements would be investigated and a number of alternative designs would be prepared within this limited budget. A subsequent application based on these designs would then be submitted for implementation and follow-up. This would allow projects to avoid unnecessary pressure. An additional advantage would be that the expectations of the involved parties would be more realistic, saving time, money and disappointment.