The world of the sales representative revolves around profit maximisation, and stability is very important. Actions are based on mutual trust and are subject to the motto of, a deal is a deal. Relationships among sales representatives are important, and the behaviour that they exhibit is genuine. Power is decentralised.

In the world of the politician, the majority is important for getting things done. Loyalty to the group is thus important, even if a politicians opinion differs from that of the group on a number of points. Because the majority seldom consists of a single group, temporary coalitions are often necessary, sometimes with opponents or even enemies. Decisions emerge from a particular view of the world. In the world of the politician, references to certain facts are necessary to maintain good order; the end justifies the means. Power is centralised. 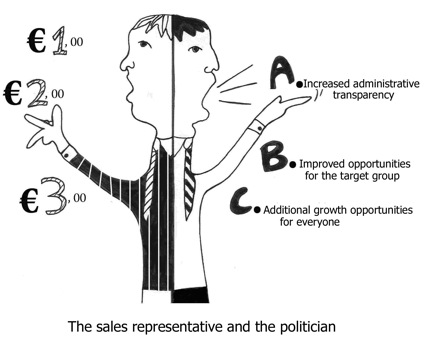 Figure 7: The sales representative and the politician (Illustration: Rachèl Harmsen)

Most people intuitively feel more attracted to the first of these two worlds; the second brings many negative associations to mind We don’t play politics here is a frequently heard remark in organisations, even if it is not true. Even though most people find the world of the sales representative the more attractive of the two, it has an important disadvantage. Decision-making according to profit maximisation works only for decisions in which clear cash flows are available. Decisions that involve such dilemmas or issues as investing more in education, the environment, health care, highways, research, defence or nuclear energy cannot be expressed as an unambiguous balance between profit and loss. The political model is the only possible model for such decisions. It is therefore necessary to play the political game.

A young engineer once had to carry out an ambitious wind-energy project in a municipality somewhere in the country. Through an ingenious savings system, residents of the municipality could save for a number of windmills, with a goal of generating thirty per cent of the towns electricity needs with their own windmills. This would require ten windmills. The idea originated with one of the members of the town council.

The townspeople were considerably less enthusiastic about the savings programme than had been expected. With great difficulty, they were able to save enough to purchase one-half of a windmill. To prevent the idea from becoming a complete failure, the municipality decided to supplement the amount, so that at least one windmill could be installed.

In the first draft of the final report, the engineer thus wrote that the result was quite disappointing. Such a report, however, would mean loss of face for the council member, who therefore urged a reformulation. The text ultimately came to read as follows: The project is a great success; the municipality has demonstrated its support for the environment and has made its however modest contribution to the fight against climate change. The young engineer was initially unaware of the political framework of this project. In order to prevent future projects from the council member from getting off the ground, he was forced to play (along with) politics.

It is more difficult to carry out a project in a political environment than it is to carry one out in the environment of the sales representative. Decisions surrounding a project depend upon the political game and not on what would be most effective for the project. The catalyst for beginning a project is often political, and it therefore determines the force fields with which the project team is confronted.

The project leader initially had difficulty getting the project started. The team members who were to carry out the work kept finding excuses not to do their jobs. There was always a problem or setback, and there was considerable discussion. The discussions usually shifted to the question of whether the project itself was a good idea. The project leader would then defend the project it would mean a great improvement for the customers but he was unable to generate any enthusiasm for the project.

Once the project leader realised that many of the workers did not (fully) support the project, he decided to focus first on the task of reducing resistance to the project. He accomplished this by taking the time to visit the various affiliates. He also talked more with the supervisors and employees, often informally at the coffee machine. By developing a better relationship with a number of the formal and informal power-holders, he was able to kick-start the project when it faltered. The project remained difficult, but the political approach worked much better than had the rational approach that he had tried initially.

A guide for playing politics would exceed the scope of this book. In short, the political game often takes place at the level of relationships and power relations. In a business environment, the product itself is more in the foreground.

Project leaders should realise that projects that are carried out with social organisations always involve at least some element of politics. To make projects successful, project leaders in this situation would be wise not to detach themselves from the political game. Instead, they should seek to play it as well as possible while providing substantive direction to their projects.